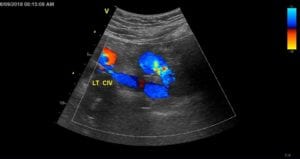 A 72-year-old male with a history of recurrent episodes of DVT in 2015 and 2017. First unprovoked DVT of left lower extremity in 12/2015, was treated with Xarelto for 6 months and 2nd DVT developed in 8/2017, he was hospitalized and re-started on Xarelto with improvement of pain and swelling until 12/2017, then it worsened while on anticoagulation. There was clinical and laboratory suspicion for multiple myeloma but no definite diagnosis. He underwent workup of hypercoaguable state which was negative. In 5/2018, he presented in Heart Vein NYC, for evaluation of severe left lower extremity pain and swelling with extensive venous stasis hyperpigmentation.  Sonogram reveals chronic non-occlusive left sided femoral and popliteal DVT and severe narrowing of left common iliac vein (CIV) due to compression by right common iliac artery (CIA) (figure 1). 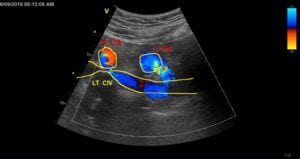 Balloon dilation with a stent deployment was successfully performed (figure 3). 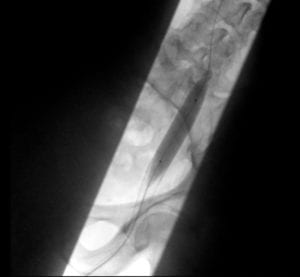 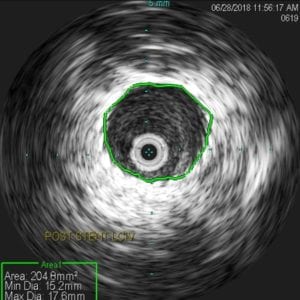