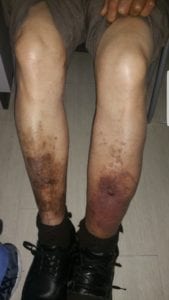 A 79-year-old man with a history of type 2 diabetes mellitus and hypertension presented with a 5-month history of poorly healing venous ulcers on the anterior and medial aspect of the left calf, which had been recurring over 14 years.

History. The ulcers were limited to the patient’s left lower extremity and did not involve the contralateral limb, despite his having advanced venous stasis skin changes and swelling on both calves. He reported having leg heaviness and constant pain that is alleviated by elevation of his lower extremities. Additionally, he reported having debilitating venous claudication symptoms, which he described as left calf and thigh pain that radiates up to the flank and buttock upon walking 2 blocks.

He had previously been treated with compression stockings and Unna boots at a local wound-care center with minimal success; the ulcers had recurred, along with functionally debilitating symptoms consistent with venous hypertensive disease. He had had several consultations and vascular Doppler studies at various vein centers; however, he had not undergone intravascular ultrasonography (IVUS) guided endovascular therapy for possible proximal deep vein compression.