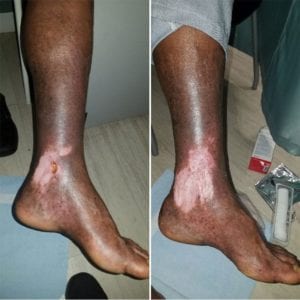 As noted in the picture, there is a venous ulcer at the left ankle with macerated irregular border, an exudative reddened base, surrounded by abnormally hyper- and hypopigmented, scarred skin. On the examination, there was marked edema (swelling) in the leg and ankle.

A fifty-five-year-old man suffering from recurrent, non-healing, painful ulcers (sores) on the left ankle for 4 years, due to chronic venous insufficiency.

His recalcitrant ulcers and associated venous hypertensive symptoms diminished the quality of life substantially.  He had as much as given up playing with his grandchildren, something he took joy in doing and used to do so effortlessly prior to his leg problem.

After clinical and sonographic examinations at Heart Vein NYC, he was treated with Endovenous laser ablation by Heart Vein NYC medical. The right picture was taken 3 weeks after his procedure. The patient was very satisfied with how quickly his ulcer healed, and especially with the ability to resume playing with his grandchildren. On the most recent follow-up,  6 months after intervention, the patient had complete resolution of venous symptoms without any new ulceration.