He has a history of known coronary artery disease and underwent percutaneous coronary intervention in 2008 (The coronary anatomy of the patient was not known on presentation).

Additionally, the patient has a medical history of hyperlipidemia and hypertension. Current medications were: Aspirin 81 mg and Valsartan/Hydrochlorothiazide 80 mg/12.5 mg. Vital signs were except for a mildly elevated baseline heart rate of 96 beats per minute, unremarkable. The baseline electrocardiogram (Figure 1) demonstrated: normal sinus rhythm, anteroseptal and inferior Q wave changes with slow R wave progression. The electrocardiogram finding was consistent with a large prior myocardial infarction. 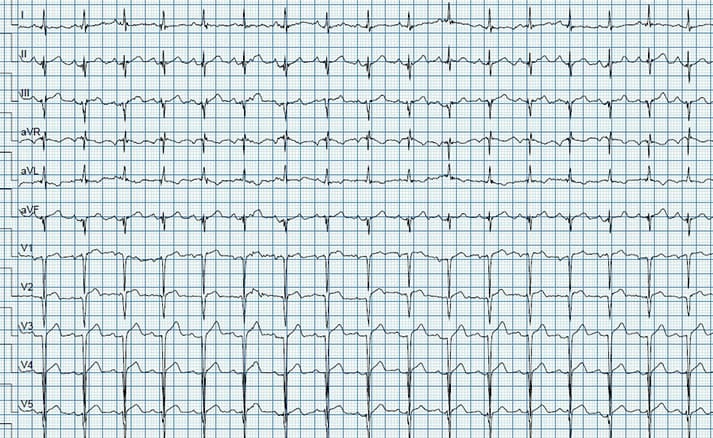 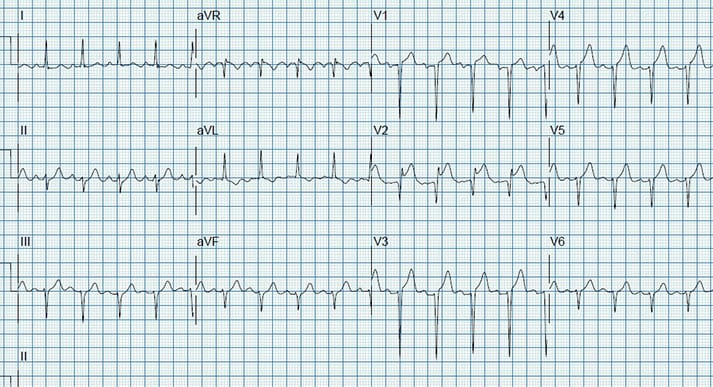 The stress test was immediately stopped and emergency medical services were called. The patient was at the same time brought onto a stretcher, IV access was obtained and a bedside echocardiogram was performed which revealed anterior apical hypokinesis and an estimated left ventricular ejection fraction of 35 %. The patient was then loaded with Brilinta and given 325 mg Aspirin and 50 mg Metoprolol.  The patient’s vital signs were stable throughout and his chest pain resolved within a short time frame. EMS services arrived and he was brought to the nearest Hospital for further evaluation and treatment.