Bilateral Iliocaval Stent Placement with Kissing Stent Technique: Successful Treatment of Refractory Leg Pain and Swelling in a Woman in Her Early 30s. 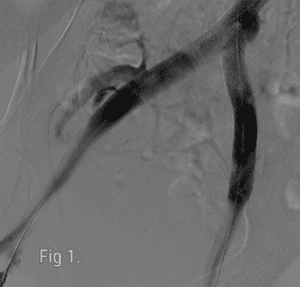 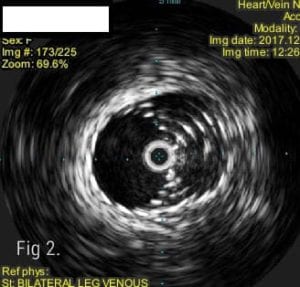 A woman in her early 30s suffering from refractory bilateral leg pain and swelling despite having had saphenous vein ablations on each limb. Other than migraine headaches, she had no any other significant medical illnesses. Her leg pain and associated symptoms of heaviness and fatigue were debilitating, significantly limiting her activities of daily living (ADL) with a resultant decrease in quality of living (QOL). Bilateral femoral-iliocaval venogram and subsequent evaluation using intravenous ultrasound (IVUS) were performed, which revealed severe stenosis (narrowing) at both common iliac veins (CIVs) compared to respective normal reference vessel lumens. These “lesions ” were caused by focal non-occlusive external compression at arterial-venous crossings, previously described as iliac vein compression or the well-known May-Thurner Syndrome when seen in isolated left-sided cases. Both narrowed veins were treated simultaneously with iliac vein stenting using IVUS with substantial relief of her major symptoms with remarkable immediate improvement in her QOL.

Bilateral iliac vein obstruction in patients with both limb symptoms as seen in our patient above can be treated with kissing balloon stent technique with the excellent clinical outcome and long-term stent patency. A retrospective study of 115 patients (230 limbs) showed complete relief of pain (85%), swelling (62%), as well as the ulcer healing (62%) with a reported four-year cumulative secondary patency rate of 98%, and reintervention rate was only 8%.1 This study suggests that chronic bilateral iliac vein with inferior vena cava confluence obstruction in patients with bilateral leg symptoms can be effectively managed by bilateral (kissing balloon) stenting in a double-barrel fashion as observed in our patient.